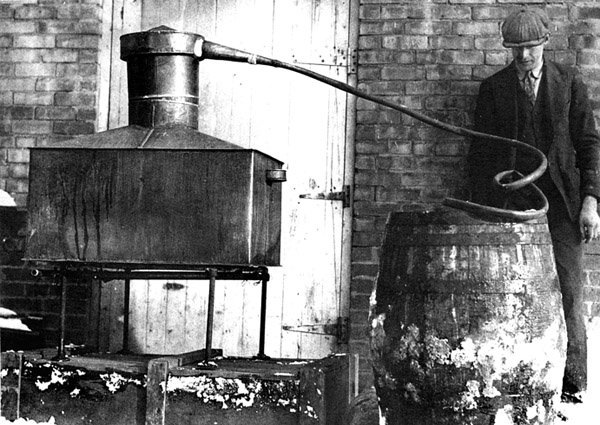 A Foundation of Faith: Moonshine & Ministry

Proverbs 22:29:  “Do not remove the ancient landmark which your fathers have set.”

The holiday meal was devoured. The pie plate only held the remaining crumbs. The table had been cleared. And now coffee and tea were served. But the most valuable course of the meal was yet to be served and that was the privilege of hearing my grandfather share about his heritage in Pentecost. The son of a moonshiner, just this side of the Prohibition, “PaPa Dean” hadn’t necessarily been raised in church except for perhaps an occasional holiday or visit with a family member. But when an evangelist brought the Gospel to my great-grandfather Henry Martin, the entire family dynamic was changed and within a matter of a few months they were all saved and filled with the Spirit. In short order, the moonshine setup was done away with. Although Great-Grandpa Martin had very little education, he was hungry for more of the Word of God. So he learned to read by reading his Bible. Family devotion times were immediately instituted during a time when such things weren’t commonly promoted. He just knew he had to redeem the time with his children. And so he did. The Martin family was in church every time the doors were open and Henry Martin was a “friend to the pastor” in every way.

This discussion prompted stories shared from my Dad about his rich heritage in Pentecost. With a well-known songwriter and preacher by the name of S.N. Greene as his paternal grandfather and maternal grandparents and great-grandparents who were viable participants of the foundational launch of the now largest Pentecostal fellowship in the world–the Assemblies of God–the musings were rich as Daddy recounted the wealth of history we all share.

I watched as our young girls listened intently to these two precious men in their lives share about our history. Difficult as it may be, they made an effort to picture their great-grandpa, now 87 years young, as a preteen boy, finding his way through a new life in Christ while under the pastoral leadership of such greats as P.C. Nelson and B.L. Greene. Sure, after awhile they had absorbed all their little heads could take with cousins nearby to play with. But this won’t be the last time they hear such stories.

Why is it important for us to speak about our heritage? And why is important for us to maintain a sense of our past within our present and project it in to our future? Why do we sing old songs from dusty songbooks? And why do we still preach from the ancient writings of apostles and prophets from centuries ago?

These things let us know about the foundation of our faith and provide us a reference point for what is right, true, and, most importantly, what will stand the test of time.

I did not live in the days of the Depression era, but my grandparents most assuredly did. If they (and others) had not chosen to live for Christ throughout that era and beyond, what would we know of such life-changing teachings today? In the same way that none of us lived in the formative days of this nation, we still speak of such and teach our children about patriotism, including the old songs and speeches, reminding them “this cost somebody something to provide the freedom we have and we must protect it”!

If they don’t know the cost, they won’t fully realize its value.

I just turned 40 recently and have already seen in my lifetime the breakdown in the generations flanking my own. Much of this is due to a mentality that all that is behind us must be forgotten. If this worship chorus is five years old or more, trash it. Hymns? We laugh at that option for modern corporate worship. “You simply cannot win people in today’s culture with that stuff any more.” May I submit this thought? Multiple generations behind us have walked out of a godless society and in to a “churchy” church, clueless about its meaning, history, makeup, or culture. But out of grace and a desire to guide the new believer from one lifestyle to a better one, a pastor, evangelist, Sunday School teacher, missionary, or, most likely, a fellow believer took him or her under wing and said, “Welcome to your new life! Let me tell you about all you’ve just inherited!” We sell them short if we never reveal the history. And we insult a new generation of believers by telling them they can’t understand or appreciate all that the Church has to offer.

No, it doesn’t have to be stuffy or “old school”. We don’t have to sing those songs the way they’ve always been sung. Throw in an electric guitar, a drum kit, and a few lights. Shoot those lyrics to the media booth. Preach from a highboy table or sit on a stool with your notes in your tablet. But let us not forsake the foundation that paved the way for what greatness lies before us in the final watch of this Commission before Christ returns.

Looking back but moving forward,
Bridgette