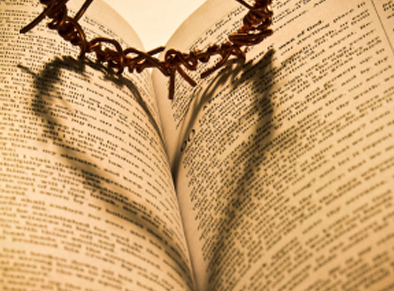 1 Samuel 16:14-18, 23:  “14 But the Spirit of the Lord departed from Saul, and a distressing spirit from the Lord troubled him. 15 And Saul’s servants said to him, ‘Surely, a distressing spirit from God is troubling you. 16 Let our master now command your servants, who are before you, to seek out a man who is a skillful player on the harp; and it shall be that he will play it with his hand when the distressing spirit from God is upon you, and you shall be well.’ 17 So Saul said to his servants, ‘Provide me now a man who can play well, and bring him to me.’ 18 Then one of the servants answered and said, ‘Look, I have seen a son of Jesse the Bethlehemite, who is skillful in playing, a mighty man of valor, a man of war, prudent in speech, and a handsome person; and the Lord is with him.’

“23 And so it was, whenever the spirit from God was upon Saul, that David would take a harp and play it with his hand. Then Saul would become refreshed and well, and the distressing spirit would depart from him.” (NKJV)

We are continually exposed to so much stimuli in our day-to-day living that it can be overstimulating to say the least. The chronic barrage of noise can easily desensitize us to the overall quality of atmosphere we are taking in to our very souls. You can’t eat in most restaurants without a television blaring, and more often multiple televisions compete with one another. At the close of the day, the silence for rest is almost deafening. The white noise of the world is blatantly missing.

When King Saul had turned his back on God, God removed His Spirit and blessing from Saul’s life. Saul had taken for granted the presence and blessing of God. While God loved Saul, He could not depart from His own word to protect His people. Therefore, a new king would be anointed, one chosen by God to establish His Kingdom. In the meantime, Saul remained on the throne, but without the blessing of God’s favor, Saul would often find himself tortured by evil spirits (which were falsely acclaimed to be from God). He was so overcome with fear and oppression that he demanded relief by any means. And here enters David into the picture.

David, unbeknownst to King Saul, was God’s anointed man to become Saul’s successor. David had not turned his back on God and was greatly favored with God’s presence. I love how Saul’s servants described this shepherd boy. They included a few things that they knew were important to the carnal mind and heart of their king, but then added, “the Lord is with him”.

David would play and sing, a gifted, talented musician already at such a young age. And when he produced music as worship unto the Lord, God’s Spirit eradicated the evil spirits that tortured Saul. Scripture says “Saul would become refreshed and well”. The presence of the Lord invaded the presence of evil and dominated.

In these critical days, weeks, perhaps months or years before the return of the Lord, it is excruciatingly imperative that we guard what crosses into our hearts and minds. Saul had so alienated himself from the blessing and favor of God that he was no longer able to distinguish between the spirit of the devil and the Spirit of God. In like manner we too can allow ourselves to become duped by the ploy of the enemy of our souls, being taken unaware in an area of weakness.

Our eyes and ears are the expressway to the heart. We must reinvigorate our discipline in the areas of entertainment we take in. The genres of music we listen to, the types of television and movies we watch, and the surplus of internet activity and video games we engage in must always be deliberately selected to cultivate God’s presence in our lives. We must train our spirits to discern the spirits. Blurred lines create opportunities for our spirits to become complacent and vulnerable to the spirit of this world. But determined choices to remain true to His Word will sharpen our ability to refute and discard Satan’s attacks.

In pursuit of His presence,
Bridgette